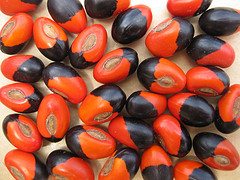 A new lawsuit against Monsanto is one part of a larger effort by the organic food movement to prevent contamination of the seed supply.

The Public Patent Foundation (PUBPAT), which filed on their behalf on March 30 in New York, argued that the plaintiffs must sue preemptively in order to avoid potential future patent infringement accusations by Monsanto.

Monsanto has a history of suing farmers for “patent infringement” when their crops are unwittingly and unwillingly infected by Monsanto-patented GMO seed. As Tom Laskawy explains over at Grist:

…the federal government ‘insists the food revolution will be genetically modified.’ Well, what biotech companies want more than anything is for the food revolution to be patented. Why is that? Because, unlike pharmaceuticals, patented genes will never go “generic” after some number of years. Monsanto and its biotech buddies can keep milking that transgenetic cow for decade after decade.

GMO crops have another interesting quality — you can ‘use’ a patented gene without even knowing it. When you download and share music and movies on peer-to-peer networks or plagiarize blog posts or books, let’s face it — you know what you’re doing. But if you’re a farmer, GMO seeds can literally blow in to your fields on the breeze or just the pollen from GMO crops can blow in (or buzz in via bees) and contaminate your organic or ‘conventional’ fields. And if that happens, Monsanto or Syngenta or Bayer CropLife maintain the right to sue you as if you had illegally bought their seed and knowingly planted it.