Twitter: @rzbh
Broadcast journalist at the foreign desk of the current affairs program Nieuwsuur (NewsHour), Dutch National Television
Still photo of the ruined old city of Homs, Syria May 7, 2014. You can view more images of the devastation by following the twitter feed of Roozbeh Kaboly

BBC Reported today: Hundreds of rebels have been evacuated from their last stronghold in the central Syrian city of Homs.
Two convoys of buses have so far left the Old City under a deal brokered by Iran and facilitated by the UN.
The withdrawal is part of a deal that will also see rebels release dozens of captives and ease two sieges.
It marks the end of three years of resistance in the central city, once dubbed the “capital of the revolution” against President Bashar al-Assad.
Much of Homs fell to the opposition in 2011, but over the past two years government forces have gradually regained control by subjecting areas once home to tens of thousands to continuous siege and bombardment. 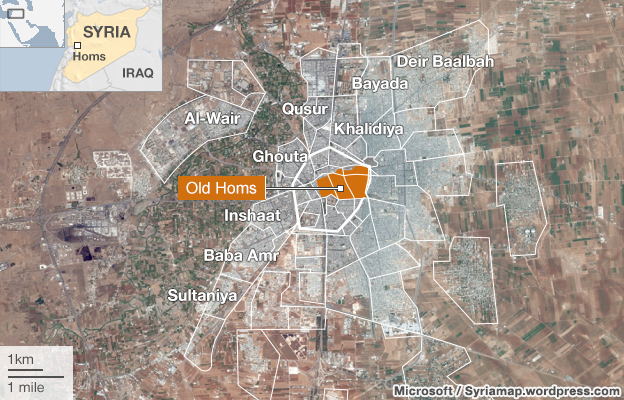 In February, the government allowed about 1,400 people to be evacuated from the Old City.

‘World failed us’
The BBC’s Paul Wood in Beirut says the rebel fighters and their families were sad and bitter as they said goodbye to a place they swore they would never leave.
They buckled finally, our correspondent adds, after the government’s forces employed the tactic of what some Syrian army officers called “surrender or starve”.
“The rest of the world failed us,” one activist told the BBC as he prepared to leave.
A video posted online by activists on Wednesday morning showed the first group of fighters, some with their faces covered, walking in a line towards green buses.
They were watched by around a dozen men in uniform and flak jackets marked “police”. In front of the buses was a white vehicle with the markings of the UN.
Each fighter was allowed to take one bag and a rifle, and one rocket-propelled-grenade launcher was permitted per bus.